I’ve been terrible at updating my site this past year (I blame it on the arrival of our second child!), but below are three of great reviews of The Spirit Farm’s eponymous album, released on SLAM in April 2015. The group, a  freely-improvising six-piece, performed at the  Southbank Centre in  November as part  of the 2015 London Jazz Festival, and we are hoping to get a tour together in the coming months.

The album also placed at no. 5 on Daniel Spicer’s end-of-year critics’ poll in Jazzwise magazine. 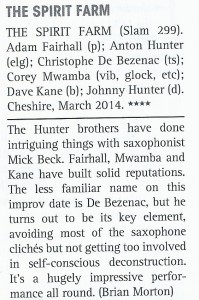