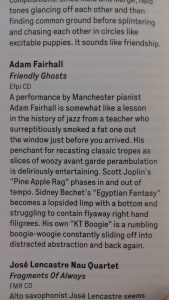 This is from London Jazz News:

Adam Fairhall is a great example of an outside player who plays inside. Raised in Cornwall and resident in Manchester, he is pianist in Nat Birchall’s Coltrane-inspired band and piano-preparer in free improvisation sextet The Spirit Farm. He is one of the pool of musicians including drummer Johnny Hunter who are associated with but never profess to completely belong to the Manchester scene. His debut solo piano album Friendly Ghosts is released on that scene’s inspiring independent Efpi label run by Beats & Pieces Big Band leader Ben Cottrell.

Friendly Ghosts has a lightness of touch, an abundance of invention, and a twinkling sense of mischief that make it an absolute scream. Pine Apple Rag slices Scott Joplin’s rag tune into piña colada. Egyptian Fantasy imbues a sibylline original with the ‘Spanish tinge’ of early New Orleans music. There’s some unabashedly postmodern thinking going into Fairhall’s gustaceous redigestions of boogie woogie, ragtime, ballad and New Orleans styles. By foregrounding the most fake-book elements of these ideas he deepens the dive into spontaneous elements, with a raucous sense of performative rather than academic deconstruction that goes beyond pastiche.

KT Boogie opens with dense digging at the low end of the piano leading to a broader conception celebrating the ‘Katy Line’ of blues lore and his two year old daughter Kate. I’m Getting Sentimental Over You is the closest to the ‘straight jazz playing’ of the ballad songbook, with enjoyable command and clear chops developed from significant experience as a sideman. Typically, Restaurant Music’s reflective mixture of Messiaen and Cecil Taylor gives way to Blue Square’s off-kilter blues.

The energy and exuberance of the performances springs from wow to how when you realize that the album was recorded live— on a solo piano progress around the North of England in 2014. The excellence of the sound, an invisibly-produced blend of warm piano and subtle ambience, comes in part from fantastic instruments on the two nights from which the album’s selections are drawn: the Steinway at St Ann’s in Manchester and the Kawai at the Lit & Phil in Newcastle.

The aptly named New Great Northern Stomp takes off from Chicago Blues legend Otis Spann’s eponymous Boogie Woogie, and drags us careening up the rippling route across the Peak District toward Manchester, clipping past the reservoirs at Woodhead and Crowden and almost certain death at the parish of Tintwistle or Glossop. Along the way you hear Northern accents: not the voice itself, but that quality of irreverence that nonetheless attends deep respect. The quality of pastiche is not strain’d.

From All About Jazz:

Following undergraduate studies, virtuoso pianist Adam Fairhall took a Master’s degree at Leeds College of Music, receiving a MMus in Jazz Studies (Performance) in 2005. Whilst at Leeds he studied with pianist Mark Donlon and took lessons with British jazz composer Matthew Bourne. The title of his album Friendly Ghosts, Fairhall’s debut recording as a soloist, gives a strong clue as to its contents, revisiting as it does the earliest sounds of jazz to the most avant-garde.

Stylistically, Fairhall’s is a melange of stride, ragtime, boogie-woogie, bop, blues and free improvisation. The trick he has finessed is to wrap-up these well-known styles in a novel format, so for example “KT Boogie” is underpinned by thunderous, rumbling notes played on the low registers. The right hand meanwhile explores the higher end of the piano in an almost crab-like fashion. Interspersed are flashes of free improvisation which are never allowed to drift far before familiar lines re-emerge.

Appropriately, “Pine Apple Rag” begins in Scott Joplin mode but breaks down, not entirely, but just enough to permit stride piano to interject. Although superficially playful-sounding, this is not meant as parody. An interesting stylistic comparator might be Derek Bailey‘s Ballads or his follow-up Standards because Fairhall comes close to Bailey’s latter recordings, but without deserting melodic structures in favour of chordal dissonance. The head is played but then is abandoned in favour of total improvisation. Another perfect example is “Blue Square” where the initial straight blues is deconstructed and broken down before resuming in stride format, in anything but a straight idiom.

As if to insert an interlude in the proceedings, there’s the unequivocally contemporary improvisation of “Restaurant Music” whilst the lengthy “New Great Northern Stomp,” opening in free territory, explores all possible stylistic avenues before its Terry Riley-esque percussive close. With his staccato-esque piano style Fairhall comes over as a mix of Thelonius Monk, Howard Riley and Cecil Taylor with some Meade Lux Lewis, Art Tatum and Erroll Garner thrown in for good measure.

Fairhall’s stream of consciousness inventiveness, which merges a myriad of styles, is rarely heard and few can get away with it. Perhaps some of Keith Jarrett meandering solo performances share some of Fairhall’s attributes as does Victor Borge’s eccentric, often hilarious approach, as echoed by Fairhall on the opening to Sidney Bechet’s “Egyptian Fantasy.” The late Dudley Moore could certainly handle, turn-on-a-dime, multiple styles, but in a comedic context. This however is not comedy music but something far more inventive and demanding. It’s also very good.

From Bandcamp Daily (reviewed by Dave Sumner, of EMusic and Bird is the Worm):

Adam Fairhall’s first solo recording goes reveals his talent for bringing together jazz of the past and present, and focusing it through the lens of his own singular perspective. On his excellent 2012 release The Imaginary Delta, the pianist created a convergence of jazz’s stages of evolution, where a rag or blues nestled comfortably alongside electronic effects and modern conventions that eschew swing and bop. But that album was made with an ensemble cast, which made it difficult to determine where the composer’s vision left off and that of the collaborators picked up. But Friendly Ghosts is Fairhall all by his lonesome, and the same confluence of jazz expressionism that marked his last session comes shining through. Nostalgic echoes of rag and stride come through strong on tracks like “KT Boogie” and “Pine Apple Rag,” while tracks like “Egyptian Fantasy” serve as a tour guide to jazz lineage. It’s one of the more intriguing solo recordings to be released in 2017.